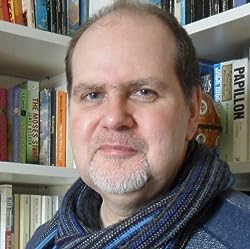 Steve Turnbull is a prolific writer and author of the Maliha Anderson and Iron Pegasus series of steampunk set novels, and editor of the Faraday Cage.

Can you give us a brief summary of your steampunk novels.

Too many! Let me give you the fundamental premise instead:

In 1843 Sir Michael Faraday presented his Method for the Partial Nullification of the Effects of Gravity to the Royal Society in London. The rest is alternative history.

Essentially all the books take place in our world but altered by this invention, but without any supernatural, magic or non-humans. This is our world as it might have been. Or in steampunk terms: A past that never was.

However, since I am of a scientific bent, the fact that gravity nullification is possible has repercussions elsewhere: for example both Venus and Mars are habitable (though just barely). Another result is that there are lots of ways that people can fly, it’s not just Zeppelins. During the late 1800s people were experimenting with all sorts of methods, and in my world, because of the reduced gravity, they can all work. I have ornithopters, and VTOL passenger liners.

Also there are no clear distinctions in technology: the Germans tend to use diesel power, the British tend to use steam but it’s not exclusive. (Plus a real Spanish invention means steam engines can work in space, while diesel can’t.)

I also introduced other real historical factors, for example there was a plan in the 1800s to move the capital of the UK to Manchester. In my books it happened, the fact that I live in Manchester has nothing to do with it.

The main point however is that in my alternative history there is an overall plan, I know where everything is going and all the books reflect that process, they are all elements in the wider story. Characters from individual series do cross into others from time to time.

You are a prolific writer, which of your novels is the best place to start for a fan of steampunk?

The Maliha Anderson (1908) books are very un-cosy murder mysteries which develop more into thrillers as the series goes on but you could call it the “flagship” series. Definitely not for anyone under the age of 15 due to being quite gruesome in places and also the occasional sex.

The Iron Pegasus books (1896) are definitely YA with lots of action-y fun.

Meanwhile the Frozen Beauty (1908) books are more like a TV show – I took my inspiration from Joss Whedon’s Firefly, though it’s not like that really. However it is a motley crew on an independent trader in a dangerous world.

There’s the action love-story Broken Vows (1857) which is a prequel to the Maliha Anderson series featuring one of the supporting cast. And the Journey into Space, 1874 which started out as a thought experiment as to how the British launched the first men into the Void.

But to get the fullest picture you have to read them all.

Which of your characters is your all-time favourite?

That’s like asking me to choose my favourite child. Impossible. Plus the fact they all contain elements of me.

Maliha herself is quite unlikeable to begin with but mellows (a bit), she’s exasperated that other people can’t see what she sees. But her love-interest, Valentine, is good and kind, and doesn’t understand her at all.

Harriet (Harry) Edgbaston only cares about flying and doing the right thing. She’s pure hero, with her sister Khuwelsa as her conscience.

Tell us about your road to publication.

I was always creative, and spent my early years reading SF and designing spaceships and submarines, and underground lairs (never enough toilets). I consumed every SF and Fantasy book I could lay my hands on – made easier by the fact my Dad and sisters also read SF.

Then I read “Cider with Rosie” by the poet Laurie Lee. It had been on TV and I knew there were rude bits in it so being an adolescent male… Well, it changed my life. I discovered that words could be beautiful.

In the space of three months I went from being almost the worst in my English class at school to being the best (I still have the school reports to prove it). And I wrote my first novel (at age 15). Which was terrible (I still have it). Then I wrote my second, and while it was still bad there was a significant improvement. Then I wrote a lot of poetry, and got paid to write commissions.

I trained in Computer Science at university, then worked for a computer magazine as a journalist and then editor for nearly twenty years. That’s where I learned to write concisely and fast.

I spent ten years writing my second world fantasy Elona (did I say I wrote fast? Well I wasn’t writing the whole time), then I switched to screenwriting and even got paid for a script (unproduced). Being able to write concisely was a major benefit for scripts.

But it was when I was working with a director, Chris Payne, on a web series script that I started to write steampunk, and launched my first book in late 2013.

Why do you write?

Because I can. I need a creative outlet otherwise I’d probably go nuts. I can paint, sculpt, and play music but I haven’t practiced them enough. It turns out that I can write quite well.  So I do.

Who are your favorite authors?

I’m not sure I have any. Does that sound bad? It’s not meant to. I love reading, and nowadays I try to read at least one book by every author (I know but it’s hard to keep up ) but I don’t have any authors I especially love. Some are better than others, of course, and some are very talented indeed. But I don’t do “favourites” 🙂

Disney’s “20,000 Leagues Under the Sea” had a profound effect on me but I didn’t know steampunk was a thing until the director Chris Payne said “can we make this steampunk?” to which I looked blank. He explained. I said “I can do that.”

When you begin a new book, do you outline the plot first? Or is it a more organic process of creation?

I am a discovery writer. Which is the fancy way of saying a pantser. I usually know the beginning, the end and usually the general idea. But other than that, I just write.

Except: Currently I’m adapting an SF TV series I wrote to prose (KYMIERA), it has multiple plotlines and many, many characters. This one has been planned to within an inch of its life. So I can do both but I prefer letting it just flow.

How do you approach editing and re-writes? Do you let anyone else read your work in progress?

Okay kids, don’t try this at home: I write the story. I polish it for spelling and grammar. I send it to the editor. I publish.

How do you create a new character and bring them to life?

For me it has a lot to do with the setting, I avoid the usual locations with stories set in India, East Africa, South Africa and Western Australia (as well as Venus). The setting has an important influence on the characters.

For Maliha Anderson I wanted a young female detective. It was to be set in India/Sri Lanka so I made her of mixed parentage, which adds lots of problems for her (never mind being female). Being a detective she also needed to have incisive logic. But all her character flaws and, frankly, difficult behaviour just grew as I wrote.

It’s critically important to make life as difficult as possible for your main characters.

The Iron Pegasus books are set in East Africa during the “Scramble for Africa”. So we’re talking British and German colonialism. And the plan was for something like the “Biggles” books. So Harriet Edgbaston is less complicated, she flies better than anyone else and she’s stubborn. Her adopted sister, Khuwelsa is the cleverer than Harry, but quieter, more studious however being native African she has her own problems.

But again the details of the characters comes out in the writing.

When you’re not writing, what are your favorite ways to relax and have fun?

What are some of your pet peeves in life?

People not seeing the world the way I do? Or is that Maliha? Stupidity.

Ah now, that is a question. Nothing inspires me. I just write. There is no muse, there is only bum in chair and writing.

I suppose if I were forced to provide an answer I might have to say “history”. I use historical ideas to highlight modern day issues.

Talk us through a normal writing day.

I don’t live at home during the week so my evenings are always free.

What is the worst piece of advice you were ever given as a writer?

“Turn this serial script into a series.”

But I sent it to someone with more experience who said “This is quite good”. (I didn’t believe them at first.)

What is your best advice to aspiring writers?

Stop calling yourself an “aspiring” writer. Just stop using that word. I mean it.

Writers write. If you’re not writing, you are not any sort of writer, if you are writing then you’re a writer.

An “aspiring” anything just isn’t doing it, so isn’t that thing.

Being in a position to write full time, and for my wife to do the same. (Since she is also a writer with an extremely demanding day job.)

What are you currently working on?  Can you give us a sneak peek into the next book?

The last few months I’ve done no writing but that’s been a conscious decision because I’ve been working on a piece of software called BookWolf. This aggregates all reviews and ratings from every Amazon site, Goodreads, Kobo etc and provides overall stats for individual books,  book series and an overall rating for an author. The details can be fetched for any author or book, not just yourself, and it will provide notifications when new reviews/ratings are posted.

However the first KYMIERA book is written and will be the next one out, but I won’t be releasing it until all six have been written, about 240K words in total.

After that I’ll be doing more Iron Pegasus books, and a new character Winifred Churchill – because of the alternative history Winston Churchill was born female. She’s a journalist and has been mentioned in other books, she also appears briefly at the end of Journey into Space, 1874.

After that I will be writing about the Modern War (starts in 1911) and how we get to the world envisaged in my free short story After Curfew which is available here: https://medium.com/steampunk-stories/after-curfew-c426899d286e

And after that … it’s a secret.